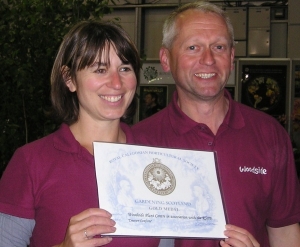 In June 2011 we exhibited at Gardening Scotland, and we built a Homes for Wildlife Garden in conjunction with the RSPB and local hard landscaping suppliers Border Aggregates and Landscaping Supplies. Our garden aimed to show keen gardeners that you don’t need to have a weedy, untended looking garden in order to attract wildlife.

Many beautiful, non-native species are suitable for attracting bees, butterflies and other beneficial insects, as well as a wide variety of birds and even mammals such as hedgehogs. We incorporated a tiny water feature, to show that even the smallest body of water can attract birds down to drink and to bathe, as well as water invertebrates.

The garden was a lot of hard work, but we were delighted to receive a Gold Medal for our efforts. Emma also appeared on BBC’s Beechgrove Garden, as was featured in The Scotsman in August. Thanks go to all who made this success possible – the staff at Woodside, and in particular our local RSPB volunteers, who not only work hard to look after the RSPB garden here at Woodside, but also gave up their time to help at Gardening Scotland.

The photo above shows Stephen and myself (Emma) receiving our Gold Medal – the smiles say it all!

This site uses Akismet to reduce spam. Learn how your comment data is processed.

Both the Garden Centre and Tea Room are now closed.

BUT, we are helping you keep gardening buy doing deliveries in the local area.

Delivery is free within a 10 mile radius of Woodside and in Kelso area. There will be a small charge for other deliveries.

By continuing to use the site, you agree to the use of cookies. more information